Winston Surfshirt “Be About You” Single Launch 2017

From Sydney’s northern beaches, Winston Surfshirt have carved their way into the Australian music scene with their blissful new single “Be About You”. Fresh from supporting RUFUS on their regional tour across the country, the band will be launching the single with an intimate one-off show at Newtown Social Club on 25th March.

Winston Surfshirt are one of country’s most interesting bands, originally a solo project of singer/producer/rapper Winston Surfshirt gradually evolving into a six-piece. Their unique blend of soul and hip-hop is the auditory equivalent of A Tribe Called Quest splitting spliffs with your parent’s favourite band.

Over the past few years, Winston Surfshirt have become vital members of Sydney’s underground live scene, with past performances ranging from sold out headline shows to festival appearances, warehouse gigs and block parties. In 2016 we saw Winston team up with label buddies Polographia providing the buttery vocals for their triple j and Majestic Casual approved track “Sly”.

Their latest offering ‘Be About You’ blends artful hip-hop with dream-pop guitar and silky vocals, warranting the support of global premieres from triple j and Clash Magazine from the get go. 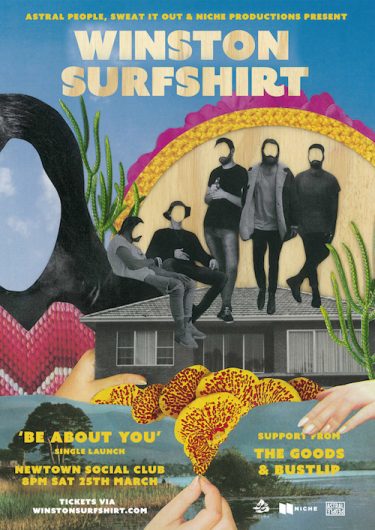