From his debut release Prince of the City: Welcome to Pistolvania to his most recent LP Blacc Hollywood, Wiz Khalifa has worked ceaselessly: carefully honing his craft for more than a decade while building a fiercely loyal following across the globe.

With five studio albums and nearly a dozen mixtapes under his belt, Khalifa has cemented himself as a titanic force in modern pop, moving between projects with stadium-filling acts like Maroon 5 to collaborations with alternative icons like Curren$y and The Weeknd with absolute fluency.

Boasting the record for the most-streamed track in a single day on Spotify and almost half a billion YouTube views, Khalifa’s latest single, See You Again (ft. Charlie Puth), has experienced a meteoric ascendency. Released as part of feature film Furious 7’s soundtrack and dedicated to recently deceased actor Paul Walker, See You Again quickly soared to #1 worldwide upon release. Reaching the top of Australia’s charts in record-breaking time, the single remained in the position for six consecutive weeks, going triple-platinum in the process.

Don’t miss your chance to take in the full force of Wiz Khalifa’s incendiary talent across Australia and New Zealand. 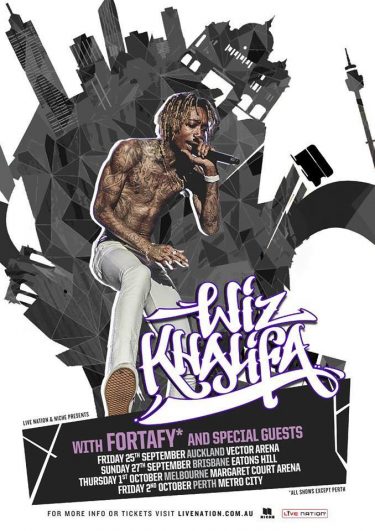